Power Couple with a Successful “Ego” Offer-Up A Presidential Revival

What do practically ALL independent  theaters and company have in common other than a passion to present great art… Joan Kane and Bruce A! Kraemer.

For a decade or more, Ms. Kane has helmed shows at nearly every prominent theater company and festival in NYC. With Bruce, – and armed with advise from one of off-off Broadway’s founders and champions, they formed Ego Actus, a diverse and powerful theatrical company dedicated to providing audiences with a complete theatrical experience – from developed scripts to the best production values. Kane and Kraemer (btw, his middle name IS punctuated with an exclamation point… it’s not a typo) are not just fine theater producers but dedicated priests of the temple of the arts, weaving a tapestry of quality live stage works that will serve as a learning tool for generations to come.

Now they are cleverly voicing political opinions – not in protest but with a simple example. They’ll give no credence to deficient examples of the presidency… they’ll hand us a story of a REAL president. Ego Actus’ production of Give ’em Hell, Harry! holds a candle up to the nature of Harry S. Truman. A president interested in war … as in ending it.

Let’s hear from the power couple themselves.

Tell Us About Yourselves as Artists

Joan Kane and Bruce A! Kraemer have both been in the New York City theatre scene our entire adult lives. We work so closely together that sometimes it seems that our marriage is a 24/7/365 production meeting. Joan directs, Bruce designs, we both produce. We like working together and find that our separate talents compliment each other. What we don’t do, we hire other people for. For example, we never act in our shows.

What made you decide to bring back Samuel Gallu’s “Harry?”

Harry Truman was a completely honest man. The contrast of him and his presidency to current events and the current office holder could not be more stark. This play demonstrates that honesty works. The current administration proves that dishonesty only breeds more dishonesty and everyone suffers as a result

Hmmmm, I think I now have my answer but, let’s get to the elephant in the room; are you making a statement about today’s political climate?

We are totally making a statement about today’s political climate. The Harry Truman was so much more like what a president should be than the current guy. People need to be reminded that civility, honesty, fairness and compassion for the common man are what leadership are supposed to be about. 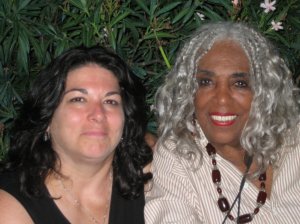 Ego Actus is a very busy company! Tell us about the company and why you started it?

Ellen “LaMama” Stewart was something of a mentor for Joan and when Joan asked her how to get hired as a director, Ellen said something llke, “Don’t wait for someone else to hire you, do your own thing. So we formed Ego Actus in 2009, right around when our children finished college. We choose to do plays we like and, as it happens, about 60% of those plays have been written by women, although we do not give ourselves a specific mandate to be feminist.

How has the world changed in the time you’ve been doing theater? How has the theater changed because of it?

The world keeps changing like crazy, It used to be that you could characterize decades as having signature social mores, styles and arts. Now things change radically, sometimes from one season to the next or even faster. The theater not only has to keep up, It has to keep ahead of the curve. This means shows have to be short and on point at all times. Technology has to be sophisticated and current. These days all but the most modest independent theaters have computer operated lighting, sound and often projections.

The next production from Ego Actus will be Sycorax, Cyber Queen of Qamara, by Fengar Gael, directed by Joan Kane, opening at the HERE Arts Center November 2 and running through November 18. We are also currently in negotiations for some 2019 projects

By Liz Cope, Content Manager in Uncategorized on September 28, 2018.
← Relentless Pleasant … and Focused … and Smart … and Ambitious … and … A View of WTC →