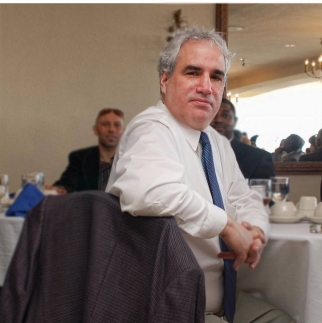 In this final chapter,  Robert “Hercule” Liebowitz boards the Times Square Express and proves that Monsieur de Broadway was killed in the drawing room with a line of credit.

Probably a bit of both.

Michael Jackson set the world on fire. Armed with a handful of videos, a commercial for Pepsi, and an other-worldly performance at the Grammys, he changed the way the world perceived music. No doubt, the Beatles changed the way we lived; but after the original MJ was finished–with his trio of ‘Off The Wall’ (1979), ‘Thriller’ (1982), and ‘Bad’ (1987),  it was no longer the exclusive property of the counter-culture.  It became another cog in the machine of capitalism.

Theater could not counter. Marlon Brando had last performed ‘Streetcar…’ in 1948, never to return to the stage the rest of his life. No one of his caliber and magnetism had replaced him, except maybe Laurence Olivier, and he was across the pond.. The theater has always been the medium of the playwright, but it is always served as the victory parade for the performers. The theater, in that sense, had lost one generation of theater-doers because it was no longer cool to do so. Soon, that would morph into two generations.

Theater of the late 1980s were soon viewed by half-filled houses. There are no shortage of examples. In 1989, on a lark (it seemed), Jack Nicholson, apparently in need of a paycheck, made the wretched movie ‘Batman’, and this celluloid embarrassment was soon breaking box office records. Other studios and stars followed suit; an entire cottage industry of adult movie-making for children soon appeared…where it remains to this day.

Neil Simon’s last great work–the outstanding “Lost in Yonkers’–hit the boards in 1993, where he was commanding a salary of $65,000 per week plus 6% of the gross. That, however, was his last hurrah, and he was soon put out to pasture. August Wilson died at a tragically young age. So did the author of ‘Rent’; Jonathan Larson died in 1996, unbelievably the night before the first preview..Sam Shepard lost his way and got involved in movie-making, of all things. Actors–too numerous to mention–made the trek right from Tisch to Hollywood, bypassing Broadway altogether.

Even successes became a prime suspect in the Murder of Broadway. Mel Brooks created a staged version of his movie ‘The Producers’, and it became, ironically, a legitimate smash hit. Then, the (real) producers got a bit piggish, inventing something called ‘Premium Seating’–a device where they could charge even higher ticket prices in the orchestra by cordoning off the very few first rows. It was met without resistance the first time around, in 2001, but fell on its collective face in 2007, when Brooks attempted a similar stunt with ‘Young Frankenstein’.

Why? Why should something that is so vital to the public be so damned expensive?

The Murderers of Broadway were now becoming a traditional, familiar hit team of usual suspects. Finally, who should appear but the Grand Daddy, the ‘Mocha Motivz’ (Yiddish for ‘Boss of the Night’)…the Grim Reaper.

That crazy little thing called the Internet. The proverbial final nail in the coffin.

People happily retreated from the physical world into a world all of their making. Talents like letter-writing fell by the wayside, much as making horsewhips had done at the turn of the last century. By now, Mtv had mushroomed into a cornucopia of reality shows, home shopping networks, cable shows on every subject under the sun, Netflix, Hulu, Amazon, dozens of sights for pornography, you name it. These days (not Covid days, but the days right before), this is how the art world is defined. Why brave 16 degree, or 116 degree weather, to hope for a morsel of art, when one could simply select from a most impressive menu on how to pass their time? The harder path to choose is to go to the theater…alas, the folks of this city and country (except tourists) have resigned themselves to choosing the path of less resistance.

In ‘Murder on the Orient Express’, one of the better mysteries by the great Agatha Christie, a very bad man is murdered on a train The train it occurs on is stuck in a snowdrift, and no one is going anywhere. The headstrong Belgian detective Hercule Poirot performs the task at hand in his usual stellar fashion. He determines that there was not just one murderer…that everyone had a hand in it. But since a very bad man had been killed, Mr. Poirot had bestowed onto the culprits some unexpected mercy, and lets them go.

The Murder of Broadway, it turned out, met a similar fate. Money, greed, lack of talent, competition, apathy–nothing was immune. So the answer to the question of who killed Broadway was: All Of The Above.

But the victim wasn’t A Very Bad Man. The victim was A Very Good Thing. Of Someone Dear… to our hearts.

Perhaps a good thing will rise from the wreckage of this virus. Sometimes, just sometimes behind every problem is an opportunity. Perhaps, when our Time Out Chair has been put back in the closet, a more meaningful, less expensive, important brand of theater will emerge, with story-telling about subjects that matter, which will remind us how to live our lives.. One can only hope.

By Liz Cope, Content Manager in Uncategorized on May 20, 2020.
← Domenick Danza’s Shakespeare from the American Point of View This theater is a SAFE SPACE →