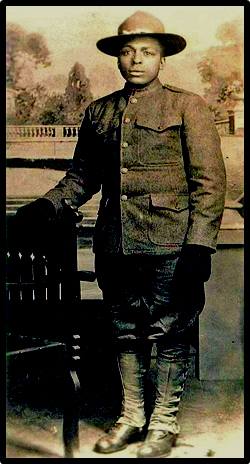 Another unknown thread in the rich tapestry of African-American contributions to US history is revealed in The Buffalo Hero: The Wayne Miner Story, about the last soldier killed during World War I.  A member of the legendary “Buffalo Soldiers” regiment who won medals and were hailed as heroes despite sparse or inferior weapons and training, Miner died three hours before the signing of the Armistice on November 11, 1918 while bringing ammunition to the troops.  Like many other Blacks, Miner suffered harsh treatment because of prejudice from without, while sometimes having to fight his fellow soldiers to survive, much less thrive, in a world that grudgingly tolerated and used them, but viewed them as inferior and expendable cannon fodder.

The play focuses on Miner (Darrell Wyatt), a proud third generation Buffalo Soldier and his troop mates Franklin B. Seymoure, an aspiring doctor (Bereket Mengistu) and the gentle yet determined Rafius Rucker (Shatique E. Brown).  While all three are eager to prove themselves and serve their country, Seymoure’s hot temper often puts him in conflict with aspiring general Cpl. Kenneth Quincy Blu III (Timothy Patrick Walsh, appearing courtesy of Actor’s Equity Association), sometimes bringing harsh treatment down on his and the trio’s heads.  Miner and fellow Buffalo Soldier and commanding officer Lt. Henry Nugent Ivan Clark (Mark J. Robinson) do their best to work together within the system to prepare the troops for battle, but face as many battles off the field as on, some of them between themselves, Seymoure and Ruckert.  Miner finds guidance and strength in the teachings and words of his mother, Mama Miner (Ms. D), who appears to him in moments of crisis to remind him to hold on to his principles and the faith she instilled in him; easier at some times more than others, but helping Miner realize that sometimes his faith is the only thing he can depend on.

Wyatt portrays Miner with the quiet, solid dignity of a man focused on his goals who sees the big picture while navigating the roadblocks in his way, and who tries to lift others along with him as he climbs.  Mengistu puts one in mind of Malcolm X, chafing under the stings of prejudice and ready to fight anyone for the basic dignities all men are entitled to regardless of colour.  Brown is beautifully touching as Ruckert, a man who is willing to do his bit but not really suited for the grimness of war.  Walsh pulls no punches in embodying the ugly realities of the prejudices of the era, his Southern accent hammering out the cruelties and indignities of Jim Crow with every syllable.  Ms. D. gently glides into and out of the action to watch over and help her son, giving him her strength while reminding him of his own, with the steadiness only a mother of strong faith can have.

Playwright/Director Kenthedo Robinson researched the play for five years in the US and overseas, a commission from Joe Louis Mattox, former historian of Wayne Miner Post 149—the first Negro post of the American Legion—in Kansas City, Missouri, who wanted the story of Kansas City native Miner to be told for the Post’s 100th anniversary.  Robinson gives us an emotional picture of the fierce battles in the barracks as well as in the field, and how they can pale in comparison with the emotional battles between us and sometimes within ourselves, and how “separate but equal” is always shown for the lie that it is.

By Liz Cope, Content Manager in Uncategorized on May 14, 2019.
← Viagas and Vernovsky’s Carcass Alex sees Pod-Possibilities →