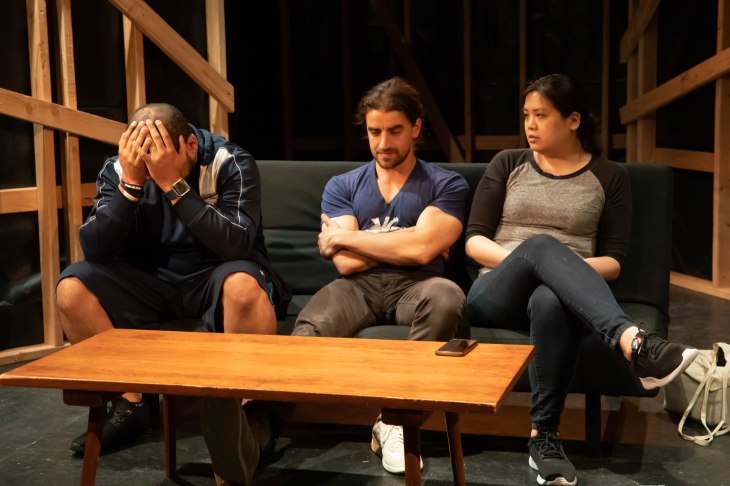 Eric stands to enjoy an easy life when he inherits his family’s house-building business, but there is an existential dread, a deep and terrible restless dissatisfaction that poisons all his plans and relationships in Eddie Vernovsky’s scalding drama, Carcass, currently having its world premiere under the auspices of the Off-Off-Broadway Wednesday Repertory Company (WedRepCo).

The play’s other four characters—Eddie’s girlfriend (Aleeza Lew), best buddy (Alan Cordoba-Diaz) , mother (Elaine Davis) and grandfather (Dan Lane Williams)—all suffer from similar angst. They are like a field of geysers, with a world of heavy hurt boiling in the depths of their Sam Shepard-like personas—every once in a while bursting forth with a fountain of epic snarling over trivia.

“What are you talking about?,” is the play’s mantra, a line hurled by one character after another groping for understanding while expressing their own dissatisfaction. The play never really attempts to answer that key question for any of the characters, but leaves the audience to work out the “quantum entanglement” of their relationships. Wondering why Eddie returns to the fold after a mysterious three-month absence, his mother explains, “We don’t have hope in this family.”

The brooding playwright Vernovsky plays Eddie himself, dragging on a bloody side of bison at one point in another inarticulate attempt to connect with his family. It gives the play its titular symbol.

Directed by Bruce Ornstein, Carcass is playing a limited run through May 19 at Shetler Studios 244 W 54 St. in Manhattan.

By Liz Cope, Content Manager in Uncategorized on May 14, 2019.
← Robert Viagas on the “Floor” Hero’s Story … Told Heroically →