MESHELLE “THE INDIE-MON OF COMEDY”

FUNNY A$ A MOTHER…COMEDY TOUR

The performance of Meshelle “The Indie-Mon of Comedy” Funny A$ a Mother…Comedy Tour and her two special guests, John Moses and Mike Troy out of Brooklyn surely gave the audience a lot of heat on a frigid winter night at the Triad Theater.

There was a well-dressed and diverse audience that welcomed the performers.  John Moses started the show with his brand of comedy, and some of his jokes were taken from his own life experiences.   The audience responded quite well to his salacious puns wholeheartedly before he gracefully concluded his rendition eloquently.

Mike Troy stroked the audience with his comedic style of jokes straight out of Brooklyn because he has mastered how to relate his personal interaction with his family into his comedy, but he reminded the audience of the homeless problem in New York City.  In his analogy, homeless animals have gotten better treatment than homeless people.  It was hilarious and the audience wanted to hear more of his tell-it-like-it-is jokes. 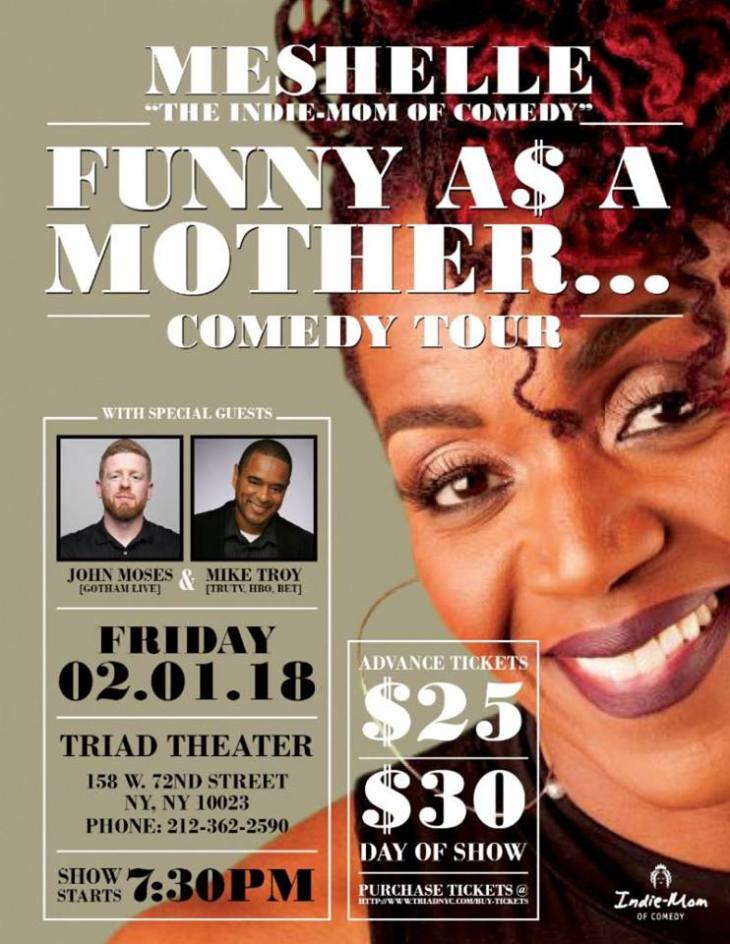 Meshelle’s presence on stage brought a special heat to the audience in more ways than one.  Members of the audience, mainly the women, got some great advice from Meshelle in her comedy in order for them to love themselves unconditionally.   The bantering in her comedy was unique and the audience showed its appreciation with laughter.  Meshelle’s comedy was the next best thing to a homily on Sundays, for there was food for thought for all in attendance.

Overall, it was a great show that forced each member of the audience to reflect on his or her carnal, natural and spiritual self!  I am confident that everyone has gotten an antidote from the dynamic comedy to use in the improvement of their lives.

By Liz Cope, Content Manager in Uncategorized on February 9, 2019.
← Too Much Dressing Once More Unto The Breach! →