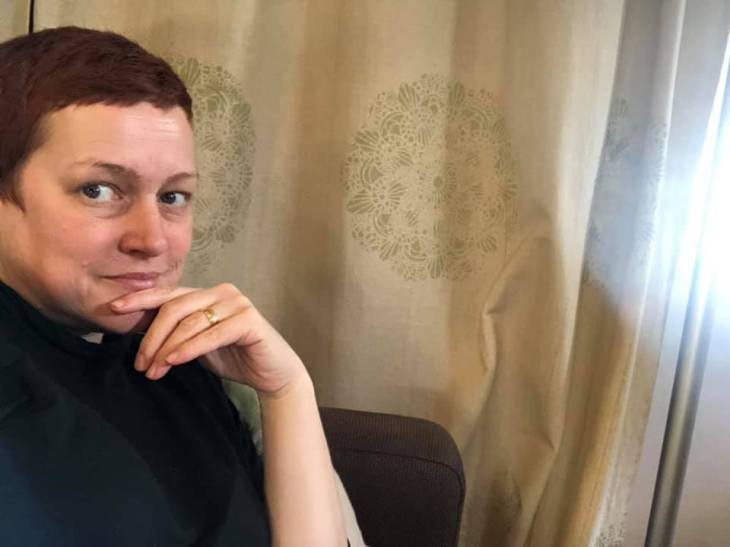 Let’s start with a 13th anniversary as it essentially began when Minneapolis comedian, Joseph Scrimshaw, needed a producing organization for his choose-your-own-adventure style play, “Adventures in Mating.”  Bree O’Connor and Ben Perry formed the company to produce the show – which ended up running nearly a year!

Then there’s a fourth anniversary, when Grant Harris, a sweet and shockingly twisted playwright grabbed Ms. O’Connor to direct his new play, “Frank,” a teenage re-imagining of the Frankenstein mythology. Playful Substance re-emerged as a producing entity for that show in October of 2016 and then again for Ms. O’Connor’s own original one act, “SAHM’s Club,” a farce about the stressors of being a Mom in Park Slope (somewhat autobiographical as Ms. O’Connor is now the proud mother of three) that debuted at 2017 Frigid Festival, directed by Jill DeArmon and won the Staff Favorite Award that year.

“People started sending me their scripts for feedback and I started meeting with people regularly to consult on practical narrative matters as well as share my knowledge of low-budget producing,” says Ms. O’Connor on how she got here. “By the summer of 2017 I was having so many meetings that it occurred to me that Playful Substance could benefit from cultivating writers and new works and that my own artistry would grow by having to work those muscles on the regular. With the support of Frigid NYC and Erez Ziv, we were able to find a home for weekly meetings and things started to take off.”

In the fall of 2017 The PC Writers’ Group first met consisting of O’Connor, Raphael Perahia, Astrid Cook, Lauren Lindsey White and Foster Stevenson. “You could not find a group of writers with more varied styles or interests,” she said exuberantly.

So, the formation of their now-celebrated Writers Group makes their third anniversary. Ironically a three-year anniversary.

“As scripts grew and changed, the needs of the writers changed. It is at this point when we started to bring in actors and organized private readings,” noting the momentous moment when the group became an incubator of produceable works.

In early 2018, with two groups creating works, an annual works-in-progress reading party called Pithy Party was formed. (Yup, in their second year so…)  Pithy is now an annual June event – a free event featuring 10-minute pieces from things our writers are working on; “a piano recital for writers” says O’Connor whimsically.

The event now includes industry, colleagues, and even schwag! “Our first year everyone got a vial of slime – y’know …a “playful substance.”

So when it all began, Bree O’Connor was an artist retained to shepherd a colleague’s play to NYC. Now, she juggles three kids and a company with an immense reputation.

PC has championed new works and autonomy for its storytellers. Notably, they created an immersive project to benefit Lifeway Network, a local organization that provides educational outreach and transitional housing for survivors of human trafficking. This project, Still We Grow, involved six writers, one director, over a dozen actors and [no kidding] over a thousand feet of twine, a dozen hand-painted panels and 400 yards of fabric to create a one of a kind, guided experience through several interwoven stories of human trafficking. The largest number was what was raised. Nearly $2000 for Lifeway Network and unlimited knowledge to the audience about the heinous coercive tactics used by traffickers and exposed the systemic problems that contribute to the exploitation of human beings.

The best of companies easily become a springboard for their members. Raphael Perahia has two productions under his belt: Merchants – a one-act – and a full-length (making his directorial debut as well), “Shelter In Place.” This play won great praise in the press and is one of the Notable productions in Jan Ewing’s Book series EWING REVIEWING. Raphael is finishing a new play about a WWII Spanish spy and his marital issues (based on a shockingly true story) and getting ready to start on his next idea.

Their next opus, “Tell Me” by Lauren Lindsey White, is a project that was originally a solo show when it came to the group in 2017. “Lauren had a vision for expanding the play and used our group meetings to rework the narrative to fit into a new concept that walks the viewer through the aspects of trauma recovery that we rarely discuss in public,” O’Connor elaborated. As Elle deals with the aftermath of a traumatic event, she begins to question everything about her life that has led to this moment. Past, present and future worlds collide, in this experimental memory play that explores identity, beauty and loss.  This deeply moving piece premieres on March 19 at Access gallery, downtown. Tickets available at https://www.artful.ly/store/events/19980 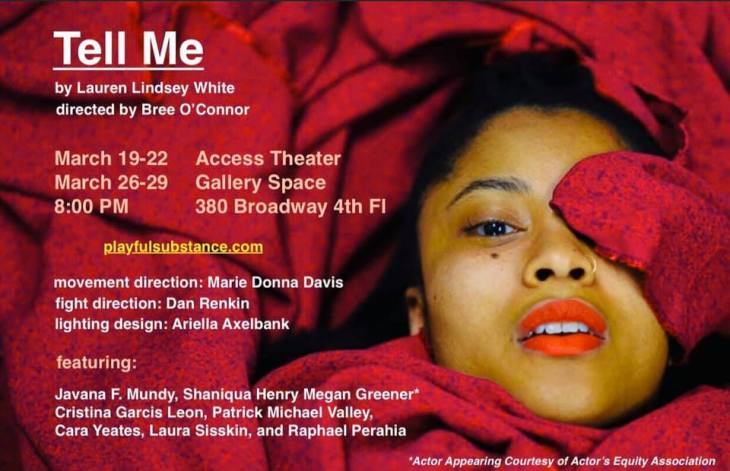 Season three – already in the works – has a memoir-style play, Under the Bridge by Jackie Reason, about a young Afro-Caribbean girl adjusting to life in an affluent, White section of the Bronx during the 1970’s when the rest of the borough was literally on fire.

Me, personally, I look forward to this play. I lived in the burning Bronx in the 70s – just outside that affluent section.

Tori Barron brings us a unique, episodic-style narrative about the journey of a Transwoman living in Hawaii in Passing and Failing in Paradise.

Wistfully, O’Connor concluded our chat with “It is only a matter of time when we will be ready to announce that another play is ready for production. Some will stay with Playful Substance. Some will go to other companies. Some Writers will want to self- produce. And still others will set pieces aside and start new ones, or get distracted by other opportunities, and maybe they will get back to it and maybe they won’t. Hopefully, we can keep going and keep providing support for artists’ development. I am proud of the home we are building for artists. Everyone gets out what they put in and those that put in the work, they tend to stick around. I think that says a lot more about them than it does about anything I’ve done. The one thing that DOES make me feel good, though, is when a person comes into the group identifying as an actor or a director or just a person who likes stories but definitely NOT a writer, finally gets convinced that they ARE a writer, that they CAN write… that is enormously satisfying to me. When people immerse themselves in the work and they start to listen to others’ work and ultimately their OWN work as an artist of competence and value… yeah. THAT is satisfying to me. I hope I get to do this for a long, long time.”

Ms. O’Connor oozes love and respect for her artists and seems genuinely thrilled at everything that happens – whatever the time or the costs. Maybe that ooze of love is the real playful substance.