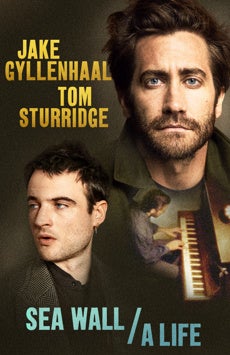 Parents, children and the incredible fragility of life are the subjects of Sea Wall/A Life, a pair of deeply dramatic monologues by Simon Stephens (author of Tony winner The Curious Incident of the Dog in the Night-time) and Nick Payne, as performed on Broadway with master class brio by Jake Gyllenhaal and Tom Sturridge.

So many plays and films deal with family dysfunction for dramatic or comic effect. After all, conflict is the soul of drama. But these two plays find their drama in a pair of deeply loving families. The enemies are literally birth and death. These are plays about the unbearable preciousness of our closest relatives, and the agony associated with gaining and losing them. Though written by different authors, the two playlets are very similar in feeling.

In Payne’s Seawall,a moment of inattention has dire consequences. Sturridge plays a man who led a fairly colorless life until the birth of his daughter. The child in question comes alive in Payne’s exquisitely detailed script, related by a master storyteller. She is so innocent and adorable, that you just know some dreadful fate awaits her. That dread is the only overtly manipulative note in an otherwise glowing and harrowing play.

Stephens’A Life is more complex and creative. Gyllenhaal plays a man reliving the two most emotional nights of his life, the night his father died and the night his daughter was born.

At first it seems like they both happened the same night because he tells the stories overlappingly. But it gradually emerges that the events converge in his memory. Gyllenhaal conveys every emotion of the twin situations—the joy, the fear, the grief, the anticipation—and combines memories of his father with his expectations for his child. Both stories wind up in different wings of what is apparently the same hospital, and we pace with him and share his apprehensions and hopes as he waits for his life to be changed forever.

Presented on a nearly bare stage, Seawall/A Life is a double dose of raw storytelling. Walking out of the show and audience member was heard to say “Now that’s Broadway.” He said it about two one-act plays with no singing, no tap-dancing, no flashy costumes nor confetti cannon. In fact, little more than the proverbial two plans and a passion. That passion is love. Family love—the most fraught kind.

Directed by Carrie Cracknell, Seawall/A Life is playing a limited run at the Hudson Theatre on Broadway.