Ps in a Pod, a new web series, created by and starring Alex Pires, and co-starring Stephanie Windland and executive produced by Richard Wingert starts on a blind date between Pete (Pires) and Polly (Windland) at a bar in Brooklyn. At first, they seem to be “two peas in a [neurotic] pod” but something is off. After a ton of awkward fumbling – including an uproarious attempt at sex – they simultaneously realize they are perfect as friends. As luck would have it, Polly is looking for a room and Pete needs a room-mate. A best friendship is born! “Pod follows how funny and real it is to have a close, platonic friendship between a man and a woman,” says executive producer, Richard Wingert.

“By eliminating the “Will they? Won’t they?” dynamic we make room for a ton of very funny and very touching situations that audiences have been deprived of in an episodic sitcom format,” creator and star, Alex Pires, exuberantly exclaimed; while co-star, Stephanie Windland chimed in with “The world is going through a paradigm shift in terms of the roles men and women play separately – this series shows how they come together under this new way of thinking,” she said regarding the evolving friendship the series depicts.

Pod follows the characters through semi-story lined episodes “a day in the life” style. We see them struggle – both comedic and realistic – with germaphobia, stereotypes, cultural-diversity, identity, romanticizing the past, relationships, depression and so much more.

We learn something new about the Ps – Pete & Polly – every episode. Things that we know or will learn about ourselves as well. It seems the stronger their friendship, the wilder things get. They just want to be happy and healthy but between self-sabotage and the universe who knows what will happen! 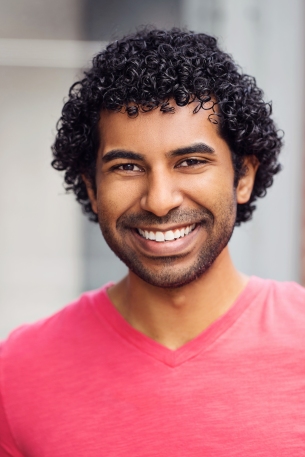 That tall, broad-grinned fellow in the picture is the creator and star, Alex Pires. Aside from being a really strong actor, he is an imaginative articulate man. Ai spoke with him briefly on career and Pods.

Tell us about yourself.

I’m an Actor first and foremost. I created this web series to work on something I was really excited about and to have complete creative freedom. Wearing all these hats is just a means to an end but it’s been a very enriching experience. I grew up in New Bedford Massachusetts. After a lot of soul searching and taking a 180 from the Physician Assistant career I was on, I decided to pursue acting professionally. I booked some cool jobs in the small Boston market, saved enough money to move and came to NYC in the summer of 2015. I’ve been lucky enough to work on some really interesting projects: Altered Hours, Texture and Filling In, all available on Amazon. I worked on an episode of Netflix’s The Punisher season 2. I also recently had a Capital One commercial air nationally. Now I’m deep in the making of Ps in a Pod.

What inspired you to create Ps in a POD?

I’ve been working on some version of this show for about three and a half years. In late 2015, I ran into a colleague I did a web series with back in New England and we decided to write a “Roommates Shenanigans” type sketch show. I didn’t have much writing experience but I had a lot of excitement and not much else going on so I decided to at least try. Within a month I wrote several “sketches” and received extremely positive feedback. Unfortunately the collaboration sort of faded with that colleague, as they tend to do, and not much happened with those scripts for a while. I burned through two more creative partners in 2016/2017 before landing on Stephanie Windland in 2018. Within that time the show began to really take form and I discovered an angle that I felt strongly about: what if the male and female leads of the show were just friends…? No “Will they? Won’t they?”, no easily explainable excuse like someone is gay or put in the friendzone. They both decided to be friends and they just really hit it off in that way. I’ve never seen that before and yet it’s such a real thing. I started thinking of all the comedic opportunities that would come from that dynamic and I began to get excited again. From there I started really thinking about the type of show I’d want to make and how I’d fit everything I had already written into this new concept. I decided I wanted to make a show that had a nice blend of comedy and drama. I wanted to pay homage to all the shows, movies and actors that inspire me. I wanted to make a show that celebrated women and minorities. A show that has a tangible message or lesson in every episode. I wrote what became the pilot with a wonderful Actor/Writer, Tory Flack. Then Stephanie agreed to co star and co produce the show. Those sketches I initially wrote became full episodes of the show. We deliberated on a title for a while and landed on “Ps in a Pod” because of the sort of play on the phrase. Our characters names are Pete and Polly so we thought it was cute. Stephanie and I just went on from there.

In terms of writing, I would write the first draft of the script after we landed on the idea of the episode. Once I felt I couldn’t do more with it on my own, I’d ask Stephanie for notes/feedback, I’d make adjustments as needed and we’d repeat that until they were “finished”. But we all know it’s never really finished. In terms of acting I feel very connected to the character because I created it from scratch. Pete is really just an extreme version of myself in a lot of ways. It’s my comedy though so I don’t really struggle with that aspect. I’m someone who always strives for excellence in my work which includes this. I’m trying to create the best quality web series I can with the resources I have. It’s also been great to assemble a team that’s so skilled and diverse. I let everyone do their jobs and we come together to make sure it all supports the vision of the show. I assume the way we’re doing it is very different from how it’s done on bigger sets but on ours most people are wearing multiple hats. We’re all doing what we can so that way when we see our name in the credits we can be proud.

Tell us about your vision for the future in terms of TV, sitcoms, programming, networks, etc.

I think the future is bright. I’m not sure what it looks like exactly but the streaming platforms seem to really appeal to people. I know it does for me. I think Ps in a Pod could definitely fit in on one of the major streaming platforms. That being said a lot of people watch cable/network TV so it comes down to what the best offer at the time is.

We have shot three out of our eight episode season. The first episode is already available on YouTube and Vimeo. A show is nothing without an audience so we’re trying to get as many people as possible to watch the pilot. They’ll obviously love it and become followers. Then after the rest of the season comes out and we’re the talk of the town the studios and production companies will be lining up to make this happen!….. best case scenario.