After a successful run in the New York International Fringe Festival, C.A.G.E. Theatre Company is proud to encore The Long Rail North, written by award-winning playwright, Michael Hagins, and directed by Planet Connections’ former Artistic Director, Brock H. Hill. The riveting play about a Black Union soldier and a young White Southern girl, will be at the Soho Playhouse, for a special three-performance run.

The Long Rail North is the story of Private Thomas Morgan, a Black Union soldier, who must escape via train with a young Southern White girl named Molly Barnes that he rescued from a plantation fire of a nearby Civil War battle. Exhausted with limited resources and even fewer allies, Thomas continues traveling north in the near-empty boxcar, hoping to get Molly to safety despite her ignorant and preconceived opinions of him and his race, all while both Union and Confederate forces pursue them. He will do whatever he can to protect her…at all costs.

Playwright Michael Hagins shares his journey with this gripping play. 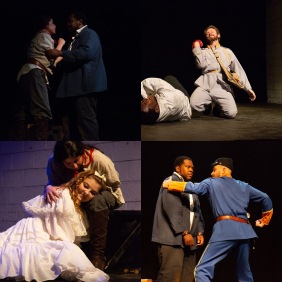 I started writing The Long Rail North when I was 15 years old.  I had a love for the Civil War and its history, and for the brave Black soldiers who risked their lives to save others.  When I finished, it only had 3 characters (Thomas, Molly and Vickers) and was roughly 20 minutes long.  It took me a long time to find it again and fill the holes and do the edits I needed to feel good about it.  I think I picked it up again way back in 2003, and even then I didn’t have a computer at home so I’d spend a lot of time in computer labs writing and editing.

Even after I finally felt good enough about the script, I wasn’t sure about getting my writing out there to the public, and especially that piece.  I was never confident about my writing, and honestly, I took me meeting Xavier Rodney in 2011 to finally decide to put it on with any degree of confidence.  He and I worked so well together from the start, and having a young African-American voice to bring the character to life was all I needed to finally have public readings and submit it to festivals. 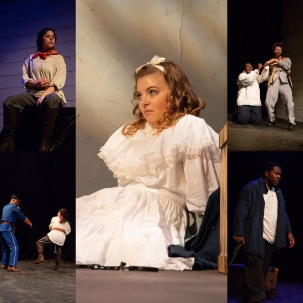 The first time I put the show up, it ended up having 3 performances in a now-defunct festival for 8 people.  TOTAL – as in across the 3 shows. The shows took place during a snowstorm, and yet the actors always showed up and always did the show.  I felt so bad that I couldn’t give them a more full house, and I remain so thankful to them that they stuck it out with me.  When I submitted it to Planet Connections Theatre Festivity, I felt like it was a near-finished product.  I say that because none of my work is ever truly done.  Even this play…maybe I missed something.  Maybe there’s more I could create.  And luckily, I’ve always had an amazing cast and crew to keep encouraging me to create more and to be happy with the work I’ve been able to provide for them.