Home » Ed Levine is PREEMO in our book!

Ed Levine is PREEMO in our book!

Five Star’s three-part series on the masterminds behind the phenomenon that is CHICAGO meets MOTOWN, a regional juggernaut making its Broadway bow on June 28 at the venerable Town Hall just a few blocks from Times Square. We’ve spotlighted band managers, Lon Dolber and Mason Swearingen … Last but certainly not least …
Ed Levine, the producer and brains behind Preemo Productions.

Preemo Productions does more than just play the world’s best music. Sure, they have first-class musicians whose talent goes far beyond simple emulation. And yeah, they bring them to your theater or concert stage right in your own hometown.

What they really do is recreate a joyous time in our lives … an era where it was all about the music and its meaning. And they do it effortlessly.

Preemo’s Rock & Roll time machine let’s us relive the magic of the music.

And the commander of the time machine is Ed Levine.

Ed’s master plan is to join the impresarios along the Broad-way utilizing the brilliance of great composers and musicians like Carole King, Jimmy Buffet, Donna Summer, and Green Day. His liquor of choice: Chicago & Motown.

Thanks to Ed, Town Hall will contribute to the Broadway skyline by hosting a special one-night-only concert featuring the phenomenal band, Beginnings, and their tribute to the legendary 70/80s band, Chicago; and That Motown Band – celebrating the 60s record label that fostered powerful, definite and historic music.

After victory tours around the country, the fans can see them in theater’s mecca.

Tell us about yourself as an artist.

My name is Ed Levine. well, I’m not exactly an artist. My production company is PREEMO PRODUCTIONS. A few years ago I decided to follow a passion I have had since I was a child. I can remember running around my home as a little boy singing along to a Ray Charles tune called HIT THE ROAD JACK …..My love for all kinds of music just grew and grew. Whether rock, blues, soul, country , jazz…..all of it really, as I’ve been to hundreds of shows and still go as often as I can.

After seeing local tribute bands perform, some of them were just amazing to see. You really felt like you were actually seeing the name act ( so to speak) but sometimes even better! I decided right then to establish my promotion and production company. in addition, being very a socially responsible person, I established a business model of the following: Feeling Good While Doing Good. At every Preemo event, partial proceeds are donated to great causes I champion.

Give us the history of Beginnings and That Motown Band

After having a few shows under my belt, I had this idea of combining  2 bands, playing real Feel Good Music in a single show. The sounds and the bands didn’t necessarily have to fit together in a traditional sense, but they did need to compliment each other. After 2 sold out shows, both this year and last at one of the largest seated venues on long island, we must have done something right. The Patchogue theatre of the Performing Arts holds 1100 people. We sold it out in the Spring of both 2017 and again in 2018.

This looks incredible. What made you decide to do this show at Town Hall?

I was looking for a Theatre in NYC that has a similar capacity to The Patchogue Theatre on Long Island. Then there is the list of Must Haves and May Haves. The Must haves include a Great Sound System, excellent lighting and overall a great production . A history of both name acts and rising talent. Easy to get to with great name recognition. The Town Hall fits that bill and Much more !The bonus is they are a pleasure to work with on a professional level.

With Jersey Boys, Summer, and other Tribute Shows on Broadway, how do you think you will contribute to the skyline of Broadway?

Our Contribution: How about a perfect fit. Look at what’s happening on Broadway right now. Broadway is just exploding with tribute shows. It started with Green Day some years ago. Fast Forward to today. The Jersey Boys, Beautiful ” Carol King” , Rain ” The Beatles” and more…

Summer is opening right now which is a tribute to Donna Summer and you can even enjoy Jimmy Buffett songs in Margaretville. There is even a Tina  Turner show on the West End of London. The talk is the producers have their eye on Broadway.

CHICAGO MEETS MOTOWN WILL BE A SMASH HIT

Where do you go from here?

For this show , the sky is the limit. maybe we do multiple shows in NYC. Maybe we take this tour on the road. I can tell you the tribute scene in NYC is in it’s infancy. Preemo Productions is just getting started.

Look for articles on Beginnings members: 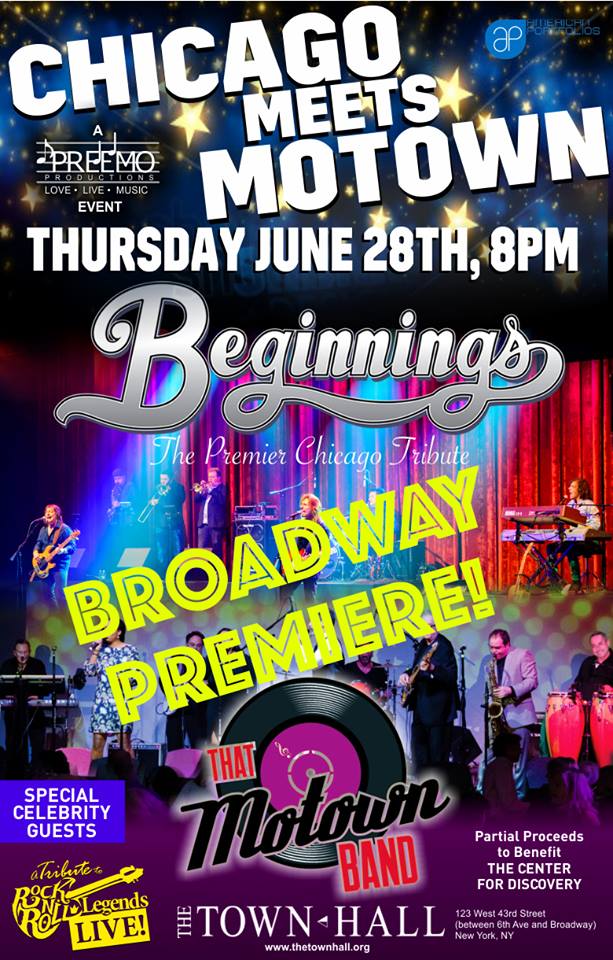