A Review by Jen Bush 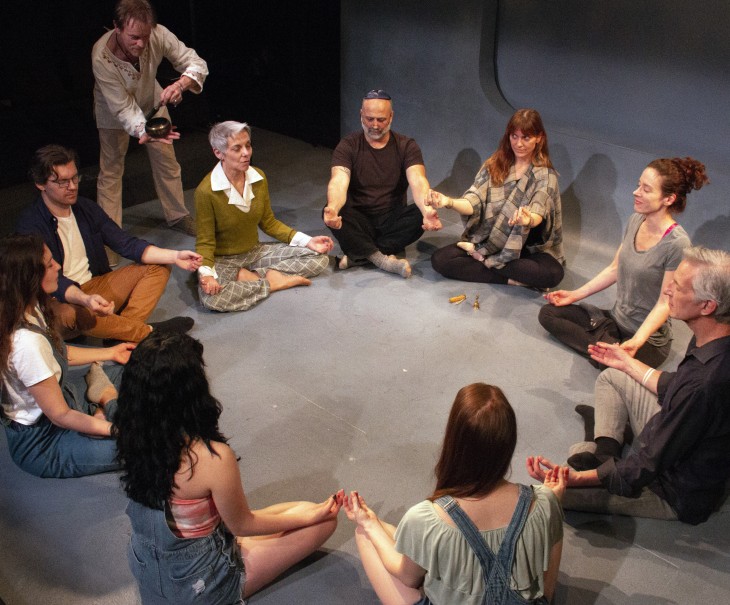 When I read the description of The Journey, I was both intrigued and skeptical.  According to the description, this show was going to include a family who likes taking drugs together, a pet psychologist, a budding pop singer, a rookie cop with a blushing problem, a retired Elvis impersonator/mafia money runner and a dog named Tom Petty possessed by the ghost of Tom Petty.  That’s quite a packed agenda.  This had high potential for eye rolling corniness, especially when you put a human in a dog costume.  I must say, I was pleasantly surprised and really enjoyed it.  The cast was a mix of actors who were early on in their careers and seasoned actors with some impressive stage, screen and television credits.  They took great care to convey the Joshua Crone’s well-crafted material with respect and an ideal balance of emotions to ensure a quality production.

Nick and Luna, a young couple in love, desire to be married.  Nick is well liked by Luna’s family but in order to secure the patriarch’s blessing, Nick must go on a “journey”.  There is no need to pack socks and sundries for this journey.  This is a drug trip.  Set in psychedelic California, this family bonds by taking a drug called ayahuasca in the form of heart shaped chocolate.  They refer to it as medicine and it’s doled out by the family shaman/therapist and her partner.  Clearly the “Say no to Drugs” campaign didn’t impact them.  Nick is squeaky clean and has not dabbled in drugs hence his hesitation to obtain the blessing.  Obviously, a lot of hilarity ensues but this show is not without some side plots and heftier themes such as jealousy and insecurity. 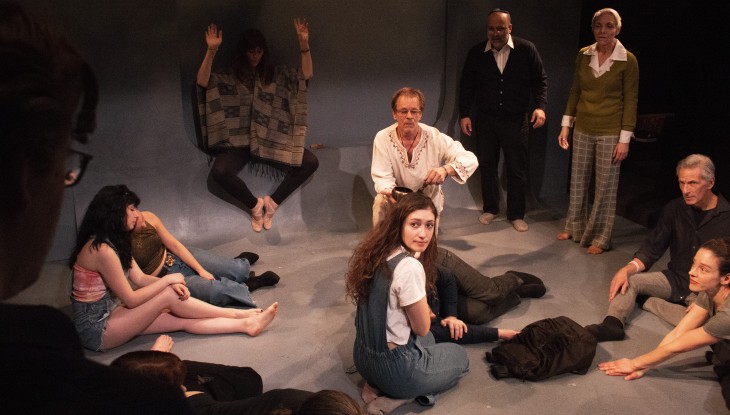 The set was black box with a few props and some special effects.  A proper set was not necessary for this sturdy play.  Clever lighting effects with some bubbles thrown in did a good job of including the audience in the drug trip.  There was some audience interaction in the form of hugs and Tom Petty, the dog, very much acting like a dog eliciting scratches behind the ears and head pats.  All audience members were invited to have a heart shaped goody.  I’m sure it was just chocolate…I think.

The cast was iron clad and all well suited to their craft and their roles.  Kelsey Susino and Jordan Theodore charmingly play the happy couple.  Jeffrey Grover and Stephanie Roseman did a fantastic job played the hip loving yet conflicted mom and dad, Mr. and Mrs. Liebman.  Katie Housely and Sami Petrucci were delightful as Luna’s sisters with boyfriend troubles.  Their chemistry was wonderful.  Tim Palmer had a short but funny and memorable role as Officer Anderson.  Annabelle Fox was awesome as Zuzu, one hot mess of a rising pop star.  Jessica Van Niel was outstanding as Shanti Marsh, the family Shaman.  She played the role with conviction and was totally believable.  Equally outstanding was Leif Riddell who played Brad Marsh, Shanti’s husband and co-guru.  His experience in the industry was evident.  There was a sort of intensity to his performance that commanded attention.  Ben Jaeger-Thomas was great as Burt Becker, the flirtatious dog trainer.  His facial expressions were priceless.  Desiree Baxter and Marco Greco as the grandparents making a surprise visit to the family to celebrate the Jewish sabbath, absolutely stole the show.  They just ran amok with the funny material that they were given.  At last we get to Tom Petty, both the name of the dog and the ghost played flawlessly by Thoeger Hansen.  This character was actually the least conflicted and was the voice of reason in the show.  Among the other human characters, he played a sweet friendly dog.  In the absence of humans, he had some substantial monologues weaving the material together.  Thoeger Hansen did a wonderful job of drawing the audience into this likeable character. 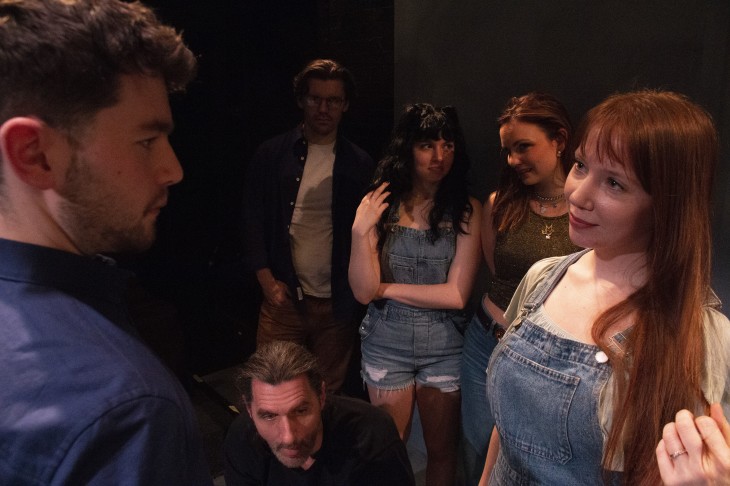 Despite the seemingly cluttered plot, the show flowed very well.  It was a very sweet ending, especially if you are a Tom Petty Fan. It was ambitious material that was done right and done well.   It’s worth the journey to Manhattan to see this show.

By Liz Cope, Content Manager in Uncategorized on February 20, 2020.
← The PaperKids answer: What is this thing called LOVE. Sean DeMers, Ariel Francoeur & FACULTY PORTRAIT: After the shooting stops →